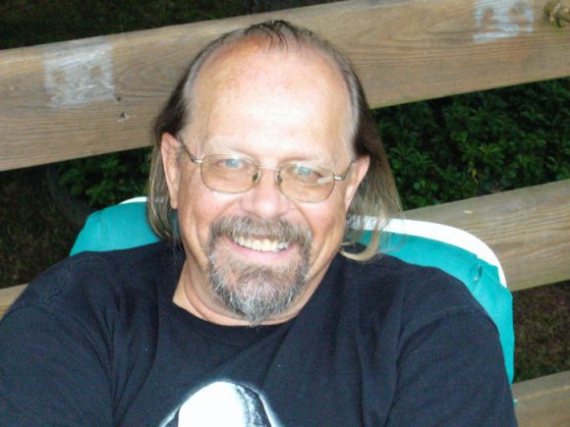 I’m still numbed and in shock.  I spent last night remembering Rick’s kindness, loyalty, and sense of humor.  I also became aware of how huge a role this humble and kind man played in my life in our nearly thirty years of friendship.

I first called Rick in late 1984 when I was a mere 22 years-old.  I was fairly new to book collecting and brand new to author stalking–Rick was my first.  I had read Rick’s first two novels MOONDEATH and MOONBOG, and loved them.  Garnering the nerviness we book addicts have, I looked up Rick’s number and called him.  I figured, worst-case he’d see me for the stalker I was and hang up, but he was pleasant, funny, very humble, and even suggested we meet for lunch at some point.  I agreed, figuring he’d forget me as soon as we hung up, but he called back a couple of weeks later saying he was going to be in southern New Hampshire and that we should get together, which we did.  The first time I met Rick in person he was carrying a huge manuscript for his forthcoming novel NIGHTSTONE, which he inscribed to me. This was Rick.  I still have the manuscript… always will.

I owe a lot to Rick.  If not for him I may have never attended a little convention called Necon.  Through him I met some of my dearest friends, Christopher Golden, James A. Moore, Bob, Mary, Dan Booth, Sara Calia, Matt Bechtel, Jack Ketchum… the list is quite long.

Though you may be gone, Rick, you will live on in the hearts of so many.

We’re going to miss you.

John M. McIlveen is the author of the paranormal suspense novel, HANNAHWHERE (Winner of the 2015 Drunken Druid Award (Ireland) and Nominee for the 2015 Bram Stoker Award. He is also the author of two story collections, INFLICTIONS, and JERKS AND OTHER TALES FROM A PERFECT MAN and the well-received novelette GOT YOUR BACK. A father of five daughters, he works at MIT's Lincoln Laboratory, CEO and Editor-in-Chief of Haverhill House Publishing LLC, and lives in Haverhill, MA with his wife, Roberta Colasanti.
View all posts by John M. Mcilveen →
This entry was posted in Uncategorized and tagged Rick Hautala. Bookmark the permalink.